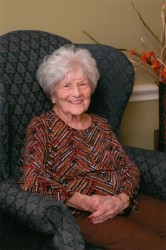 Mrs. Perimon passed away on Monday, June 15, 2015 at Hopkins County Memorial Hospital.  She was born in Golden, OK on August 21, 1927, the daughter of Cleo and Opal (Henry) Clifton.  She married Edwin Oliver Perimon on January 9, 1945 in Idabel, OK.  He preceded her in death in 2013.  She was a missionary for the Southern Baptist Convention and a member of the First Baptist Church – Sulphur Springs.

She was preceded in death by her parents and one sister, Mildred Clifton.