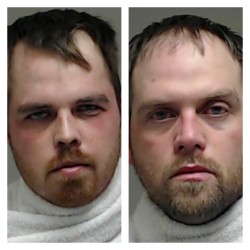 A little over a week ago, Collin County lawmen arrested two Hunt County brothers during an alleged burglary in progress. They were found to be in possession of a gun reportedly stolen from Hopkins County. After a week of investigation, Hopkins County Sheriff’s deputies Dennis Findley and Charles Humphries continue to find stolen weapons and work to make addition county burglary cases against the pair.

Chief Criminal Investigator Lewis Tatum says when all is said and done the two men could be charged with the most burglaries in county history. Hopkins County investigators are also clearing up cases in four to five counties from Franklin to Collin County according to Chief Investigator Tatum. Most of the burglaries involve theft of weapons and jewelry. To date, 31-year old Perry Jeff Yates and 29-year old Stanton Wayne Yates, both of Commerce, have been charged with two counts of burglary of a habitation before Justice of the Peace B.J. Teer who set bond at $50,000 per count or $100,000 total for each man.