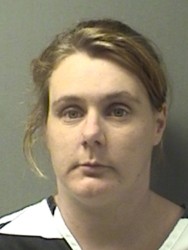 A 33-year old Sulphur Springs woman is accused of illegally taking $9,000 from two local banks. Jessica Renee Ganoung (Gah-nung) was charged with two counts of theft before Justice of the Peace Brad Cummings who set bond at $5,000 on each count.

The woman reportedly turned herself in at the Sulphur Springs Police Department just after 4:30 p.m. Wednesday after an arrest warrant was issued. It is alleged that a woman opened accounts at two banks with checks written on a closed account from an out of state bank. The combined loss of both banks was listed at $9,000. Sulphur Springs Police Detective Lt. Rusty Stillwagoner investigated the case.