Wayward Peacock to be Reunited with Owner and His Remaining Flock

‘rey Jorge‘ will be returned to his owner this week.

Sightings around Sulphur Springs of a solitary Peacock have been surfacing for the last 2 weeks.  Initially it was speculated  that the Memorial Day storm had caused the bird to stray from his home.  His journey home had many stops, including the Hospital, convenience stores, homes and high traffic areas.  However one common factor in each of his choices was a shinny surface.  He loves to see his reflection.  This behavior is common in Peafowl.  Who can know the mind of a Peacock, but some humans speculated that this vision is comforting.  Giving a sense of security, rather than an act of vanity. 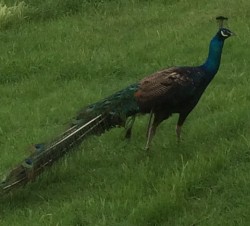 His adventure has a tragic beginning.  A neighbor’s pit bull attacked the flock.  Two peahens, bonded to ‘King George’ as he is called by some, where killed.  The owner and his family were able to breakup the attack with only 2 dead. No further attacks have occurred.  The Sulphur Springs Police were notified, however additional information about the Pit bull is unavailable at this time.  No one is certain as to what action, if any, was taken by Animal Control.

‘The initial report was sent to KSST Radio‘s Trading Post Program.  Social media played a huge role in his eventual return.  Many concerned residents of Sulphur Springs also contributed.  Every stop along his journey he was offered food water and what ever shelter his Royal Highness would accept.