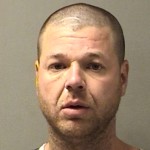 KSST has been given a copy of the Autopsy Report in the death of Tony Chance Ross by his family. The autopsy was conducted March 9th at 12:35 p.m. at the Tyler Forensic Center. The autopsy was requested by Smith County Justice of the Peace Precinct 2, Gary Alfred following Ross’ death on March 8, at 2:50 p.m. Dr. David L. Zimmerman was the forensic pathologist. 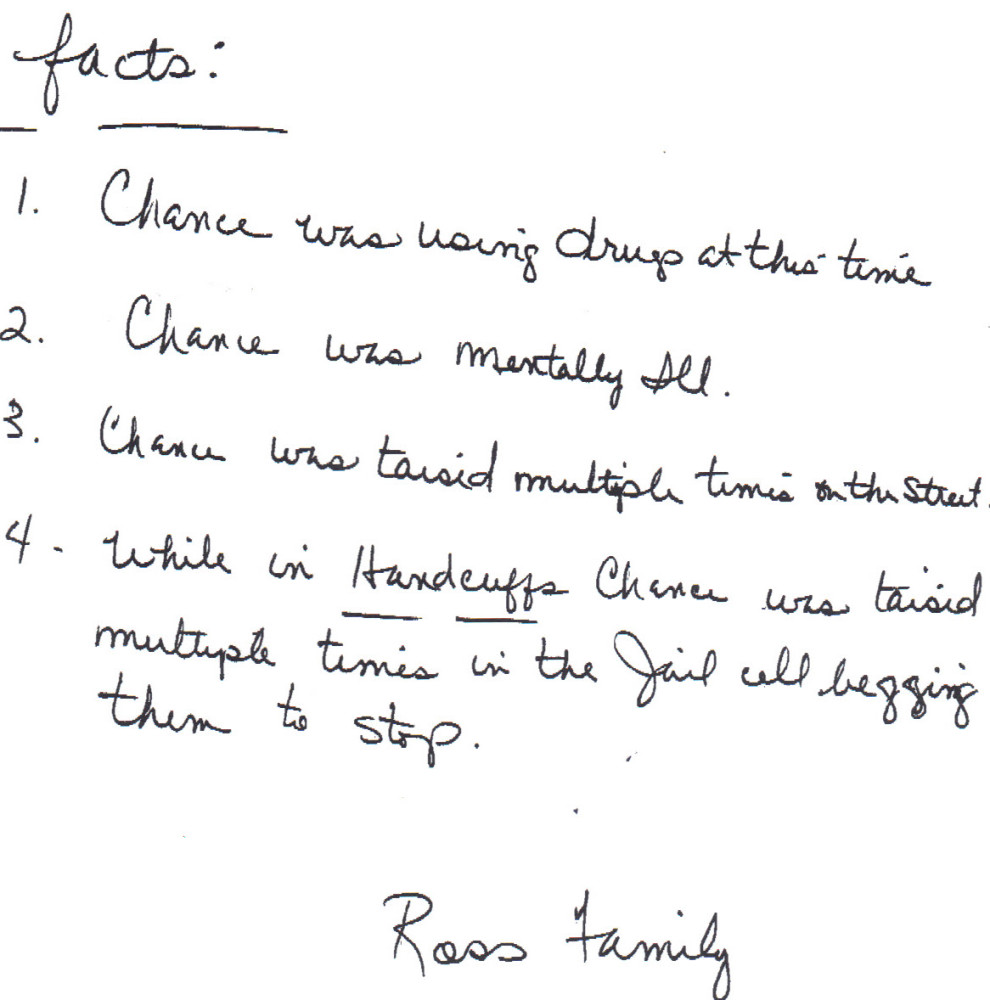 On an additional page faxed to KSST, the Ross family outlined their four-point stand on the case:

In his five page report, Dr. Zimmerman summarized his findings and opinion of the case as follows:

“The decedent was a 34-year-old man who was reportedly acting erratically and speaking nonsensically. He was taken into custody after a struggle and Taser deployment. He was taken to a jail facility where he continued to struggle with officers. A Taser was deployed in drive stun mode multiple times. After the struggle he was left in the cell alone. He was discovered unresponsive a short time later in the cell. He was transported to Mother Francis Hospital in Tyler, TX. While hospitalized he was diagnosed with hypotension, multi-organ failure, methamphetamine use, and rhabdomyolysis. His condition never improved and death was pronounced. A complete autopsy was performed.

“Significant finding at autopsy include numerous abrasions and bruises of the skin, and bruising of the mesentery of the small bowel. There is a pair of rectangular burns on the right palm of the hand. There are at least fourteen additional single and paired rectangular burns of the chest, back, and neck. Other findings at autopsy include an enlarged heart, and congestion and edema of the lungs.

“Given the autopsy and investigative finding, it is my opinion that the cause of death in this case is acute methamphetamine intoxication and physical restraint. The manner of death is homicide.

“This case has many features which indicate this may be a case of ‘excited delirium.’ Individuals experiencing ‘excited delirium’ express symptoms of bizarre and aggressive behavior, violence, unexpected physical strength, and hyperthermia. Most cases of ‘excited delirium’ involve stimulant drugs (methamphetamine, in this case). The sequence of events is nearly always the same in all accounts, delirium with agitation, sudden cessation of struggle, respiratory arrest, and death.”

Zimmerman stated, on the front page of the report, the cause of death to be “Acute Methamphetamine intoxication and physical restraint. The manner of death, the doctor reports as homicide.

Tuesday morning in a telephone conversation with Texas Ranger John Vance, the Ranger told KSST News that he will soon be submitting, to the District Attorney’s office, his report regarding the death of Chance Ross. The investigation of Ross’ death continues to be an open investigation until it is submitted to a Hopkins County Grand Jury. Ranger Vance said in a phone conversation Tuesday morning that he is awaiting additional results from evidence submitted to the crime lab immediately after he took over the investigation of Ross’ death. Vance spoke with KSST News from Florida just prior to testifying in a trial there.

Ross died Sunday March 8th in Trinity Mother Frances Hospital where he had been transferred from Hopkins County Memorial Hospital where he had been taken for emergency treatment following what seemed to be a cardiac arrest while in custody at Hopkins County Jail. A Tyler Justice of the Peace ordered an autopsy immediately following his death. At this time, KSST News is awaiting a call from the Smith County Justice of the Peace who ordered the autopsy.

Ross, 34, was arrested early Friday evening March 6 by Sulphur Springs’ police officers who responded to a call on Whitworth Street of a shirtless man acting erratically. Prior to being booked into Hopkins County Jail he was placed in the padded violence cell where he remained for 11 minutes before being found face down and unresponsive. Officers were able to find a faint pulse and called EMS. CPR was stared at the jail and his pulse was stronger but he was not breathing on his own when he arrived at Hopkins County Memorial Hospital.

According to police reports, Ross was arrested when officers encountered him and he was said to have balled his fist and charged an officer. The officer tazed Ross but Ross was able to pull the wires out and fled. The officer pursued and a fight ensued. Officers said Ross was difficult to contain and they were forced to tazed him more than once. Ross continued to resist even when taken to jail according to Sulphur Springs Police Chief Jay Sanders.

On April 9, Chief Sanders responded to a question asked during the Tuesday April 7th city council meeting. “Why are the three arresting officers still on duty while an investigation of the death of Chance Ross is being conducted?” This was the question asked by Ross’ brother, Chad Ross Tuesday night April 7th during the city council’s regular session. Ross stated that the family had viewed video of his brother being brought into jail without a shirt and having burn marks on his shoulders that seemed to have been the result of his having been tazed. Ross said his brother was handcuffed and escorted by three Sulphur Springs’ officers and that three county officers assisted those officers in stripping his brother of his pants and placing him in a cell.