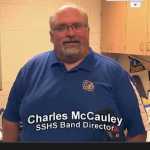 For what may be for the first time ever, the Wildcats Marching Band will have not one, not two, but three drum majors next year. Tryouts were held last week.