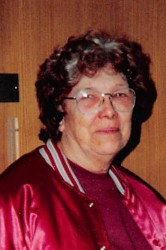 Funeral services for Ileta Lavon Ward, age 81, of Greenville, formerly of Brashear will be conducted at 2:00 p.m. Monday, May 25, 2015 at West Oaks Funeral Home Chapel  with Rev. C J Duffey officiating.  Interment will follow at Restlawn Memorial Park with grandsons and nephews serving as pallbearers.  Visitation will be from 1:00 p.m. to 2:00 p.m., prior to service time at West Oaks Funeral Home.  Mrs. Ward passed away Saturday, May 23, 2015 at her residence.

Mrs. Ward was born on February 13, 1934 in Cherry Valley, AR, the daughter of John Albert and Hazel Bernice Henderson Sifford.  She married James W. Ward on January 24, 1953 in Memphis, TN, and preceded her in death on January 7, 2003.  Mrs. Ward worked in shipping and receiving for Ocean Spray for many years.  She was a member of Beckham Baptist Church.

In addition to her husband, she was preceded in death by her parents, and granddaughter, Carrie Walker. Directions under the direction of West Oaks Funeral Home.