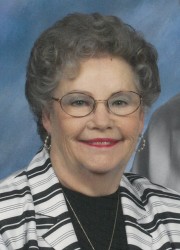 She was preceded in death by her husband, a brother, Arris Graham and a twin sister, El Dorse Mathews.