The Cub Cadet Store in Sulphur Springs sustained a considerable amount of roof damage during the Memorial Day Storm that blew through on Monday.  KSST News spoke with owner, Mickey Pegg, who considered himself lucky considering all of the damage sustained just across the street at the Sulphur Springs Airport.  As this is normally his busiest time of year, he will remain open as they repair some of the roof damage.  Luckily, none of the inventory was damaged, either inside or outside.  We reached him on his main phone line (903)885-5222 which was working Tuesday morning.  Mr. Pegg noted that he was experiencing an increased number of phone calls for chainsaws, which he still has in stock. 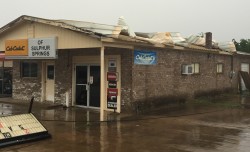