KSST News has learned from Civic Center staff that a large portion of the roof over the auditorium was peeled off of the building allowing rain water to pour in onto the stage.    A roofing company is on the way to evaluate the damage and hopefully cover the missing portion with tarps to stop the leaking.  As more rain approaches the Hopkins County area, staff members are worried that there could be more damage.  Although a decision cannot be made on upcoming events as of yet, we will keep you posted on when and where the events may take place.  The Ardis Center of Performing Arts is the next event to be held in the Civic Center Auditorium this coming weekend.  Other events are scheduled after that, including the Dairy Festival Pageant in later June.  Every effort is being made to get the damage assessed and decisions made on the quickest and safest way to get the auditorium back in use.   Civic Center staff and board members were on hand Tuesday morning. 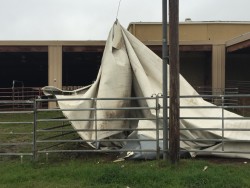 A section of the Civic Center roof removed by storm from auditorium roof, landing on opposite side of Civic Center.