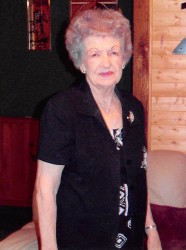 Graveside services for Aline Daniels Horn, age 98, of Commerce will be held at 2:00 p.m., Friday, May 22, 2015 at Como Cemetery. Visitation will be held from 12:30 to 1:30 p.m., prior to service time, at West Oaks Funeral Home. Pallbearers will be Daniel Womack, Dustin Womack, Clay Brown, Steve Womack, James Brown, and Rickey Townsend. Aline passed away on Tuesday, May 19, 2015 at Oak Manor Nursing Home in Commerce.

She was born on June 25, 1916 in Greenville, TX, the daughter of Clyde and Mettie Mahand Jackson. She was a housewife and also worked in the meat market for Piggly Wiggly for many years. She married Wesley Lee Daniels in January of 1935. He preceded her in death on June 2, 1993. She later married Harold Henry Horn on January 1, 2004. He preceded her in death on December 15, 2011. She was a member of the Congregational Methodist Church. She loved her Lord, family, and church. She loved cooking and was an excellent seamstress. Aline took on the role of head of household when she was only 13 as her mother was very ill. Her father and two brothers were killed when they were hit by a train while going to get the doctor for her mother. Her mother did not know for two months that her husband and boys had passed away.

She was preceded in death by her husbands, parents, brothers, Geffrey and Billy Wayne Jackson, and nephew, Eugene Fulfer.

In lieu of flowers memorial may be made to Wesley United Methodist Church, 614 Texas St, Sulphur Springs, TX 75482.