Since 1947, The Veterans of Foreign Wars organization has sponsored the “Voice of Democracy” student essay contest. The entries are judged on writing quality and oral delivery, with scholarship opportunities for winners.
In recent years, a “Patriot’s Pen” writing contest has been added for middle school students.
According to Sulphur Springs VFW 8560 Post Commander David Nichols, there were 6 high school and 58 middle school entries this year from Hopkins County schools. Though winners were selected back in January, an awards event for winners and their families was held on April 2 at the local post home. 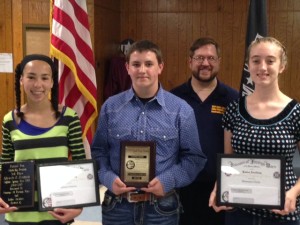 In the Patriot’s Pen division, the theme was “Why I Appreciate America’s Veterans”. The first-place essay was written by Cooper Adams, Rianna Hicks took second, and Miracle Ramon was third-place winner. They  were among 14 student entries from North Hopkins ISD, as part of a class project organized by 8th-grade teacher Lisa Sprague.

Local first-place winners advance to District competition. At National competition, a first-place winner receives a $30,000 scholarship and an expense-paid trip for the student and family to Washington DC to view monuments and historic sites.
Next year’s themes have already been announced, “My Vision for America” and “What America Means to Me”. In 2016, a Teacher of the Year division will be added, and nominations will open this Fall through the local VFW post.