With the most recent check up on SB1158, absolutely NOTHING has happened with it as of yet.  The Hall-sponsored bill is still stuck in the Finance Committee of the Texas State Senate.  Not only stuck, but yet to even be read (or considered) by the committee.  Senator Hall actually explained another one of his bills to the Finance Committee last week, but even that bill was in effect “tabled” as no one else spoke for or against  it.  It is a tough road for a bill in the Texas legislature, time will only tell if it makes it out of this committee.  KSST has reported on each taxing authority’s position on the bill, and although this bill is only the first step to give the voter’s of Hopkins County the option to increase their sale’s tax, there are many unanswered questions as to what else can occur if the bill passes.  In doing some fact checking on City Manager’s Marc Maxwell’s comments on Texarkana’s sales tax rates, I found that Marc was mostly correct.  As we drove through Texarkana last weekend, I stopped at a Starbuck’s and was shocked to find out that the sales tax on the Arkansas side was 12.25 %  Yes, over TWELVE percent!!!  I actually checked into why Mr. Maxwell got his facts wrong, as he stated that there was a 2% difference between the Texas side and the Arkansas side (8.25 & 10.25 respectively).  I came to realize that the Arkansas side has an ADDITIONAL 2% “prepared food” tax on top of their already higher than normal sales tax!!!  So, I have to say that he had it mostly right and missed the sometimes higher tax on prepared food. 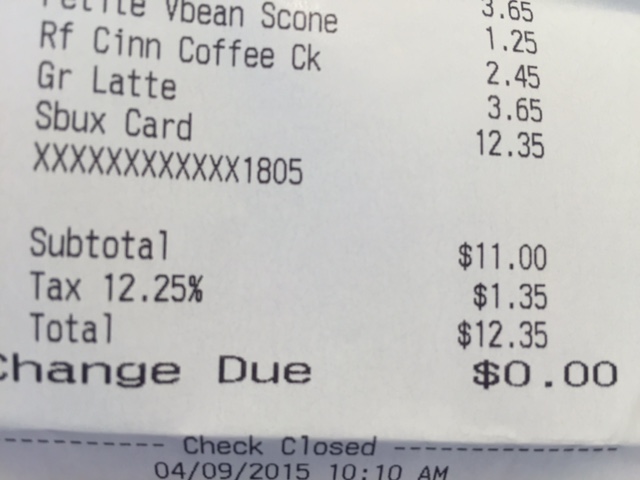 In talking with the clerk at Starbuck’s she admitted that she gets complaints all the time, especially from customers that were excited to have a new Starbuck’s closer to them as the other one was on the Texas side, but they were disappointed to know that the tax was so high.  She further stated that some customers choose to drive back over to the Texas side to save the difference in the tax.  This statement got me to wondering that if people will drive a short distance to pay a lower tax on a cup of coffee, how far would people drive to pay a lower tax on big ticket items???  I realize, that the proposed tax increase is only 1/2 of 1%, from 8.25 to 8.75 but you have to consider the impact of losing the entire tax.  If someone chooses to purchase a new refrigerator for $1000, the higher tax only costs the customer an additional $5.  Unfortunately, if the customer chooses to buy that refrigerator in Greenville, our city, county, and EDC lose $87.50 collectively, so now more than 17 additional refrigerators need to be sold to make up for the loss.  It may be a stretch to think that someone would drive to Greenville to save $5 on such a big purchase, but it’s just an example.  Taxing is a complicated game, I just hope no one considers a “prepared food” tax here like the Arkansas side of Texarkana, I think that Starbuck’s wishes they hadn’t located in that neighborhood.