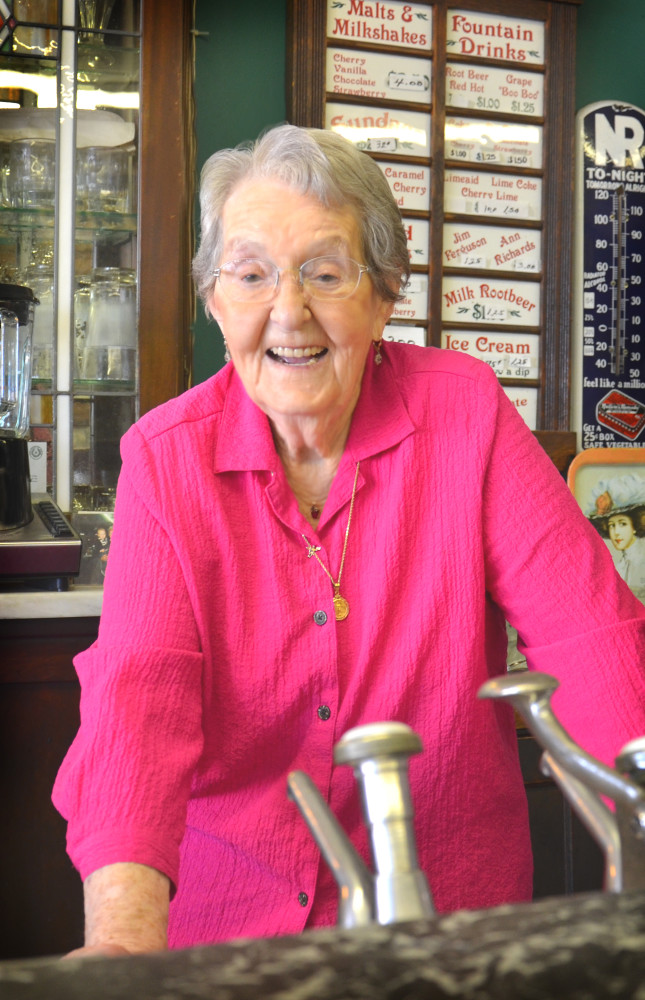 Don’t cry over spilled milk. Legendary milkshake maker Mabel Wheat would not want tears from her fan club. The 93-year old passed away in Cooper on Wednesday, April 22 in Birchwood Nursing and Rehabilitation.

Mabel Wheat spent over 60 years behind the vintage counter as a milkshake maker for Miller’s Ole Soda Fountain on the corner of the Square in Cooper, Texas dishing out life advice and cheering for the Texas Rangers along with her famous “Purple Cows and Redhots.”

A graveside service will be held at the Oaklawn Cemetery in Cooper on Saturday, April 25 at 2 p.m. The service will be under the direction of Delta Funeral Home with the Reverend Johnny Witherspoon officiating. Friends and family visitation will be at the funeral home on Friday, April 24 from 6-8 p.m.

The soda fountain with Mabel Wheat has been a landmark in the community for visitors and residents alike since Aug. 16, 1951. While she was not related to the Miller family, she was member in spirit.

In 2010 after countless years as a Rangers fan, Wheat received the treat of her lifetime as a limousine pulled into her driveway ready to escort her, her family and her boss to the Rangers game at the Ball Park in Arlington. There they were provided with a suite, interviewed on live television and she even hugged the Rangers owner.

This truly marks the end of an era as the lights have gone dim in the soda fountain, and it no longer operates on a regular basis.

The Delta County native was born south of Cooper in a small community called Granny’s Neck on September 28, 1921, and she is the daughter of Charles Talley and Lennie Williams Talley.

She married Sammie Wheat in 1938 in Hugo, Oklahoma. They lived most of their lives in Cooper and Klondike until his death in April 1999.

Survivors include son, Jerrell Wheat of Cooper; son, Hershal Wheat and wife Bennie of Tyler; along with family, friends and neighbors.

The family request memorials to be made to the Delta County Public Library.

Anyone who knew her, knew her pride and joy were her two sons – Jerrell and Hershal.

The original article can be found here.  This article re-posted at the request of  KETR.