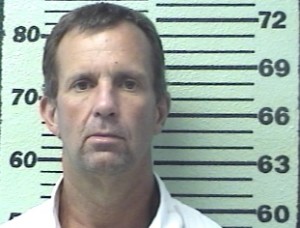 Local Sheriff’s deputies and criminal investigators were aided by the victim of a burglary of a building in Como, according to Hopkins County Sheriff’s Chief Investigator Lewis Tatum. A 357 Chevrolet motor and a number of other items were taken from a building during the night. When the owner of the property discovered the loss, he notified law enforcement and was able to follow the trail left by the one who took the property. The motor taken was mounted on a pallet and wood splinters and tracks paved the way through Como to the building where the motor had been taken. Sheriff’s deputies received permission to enter from the owner of the building that now housed the motor. From information received there, they proceeded to the home of Walt Hux, age 51 of Como and found other items taken in the burglary in the bed of his pickup.