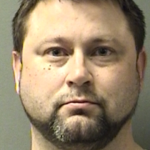 James Wesley Putnam,42, was arrested Tuesday for online solicitation of a female under 17-years of age using explicit conversation by text messaging and internet. Instead of an underage female, Putnam was being answer by local law enforcement personnel. He was arrested off of Buford Circle near the skate park. He had been told to not show up at the park but he did not heed the warning. He reportedly confessed to the crime.

Wednesday morning at Hopkins County Jail, Justice of the Peace Brad Cummings arraigned Putnam and bond was set at $75,000.