A large amount of items identified as stolen have been recovered by Hopkins County Sheriff’s Deputies after the arrest of a 30-year old Sulphur Springs man Friday night. Deputy Richard Brantley was heading home on north Church Street just before 10 p.m. Friday when he saw a suspicious vehicle coming from a residence. The man acted nervous and was in possession of some antique clocks and other items. A check of the residence revealed the home had been broken into through a back door.

The investigation led to the suspect’s Church Street residence where lots of suspected stolen items, including jewelry and heirlooms, were recovered. Sheriff’s Chief Criminal Investigator Lewis Tatum says some of the items came from two homes in the city and one county residence. A city of Sulphur Springs concrete cutter was also recovered. Chief Investigator Tatum is urging anyone who had been burglarized to come by the Sheriff’s Offic

e to identify possible stolen property. He says other arrests are possible in the case.

The man arrested in Hopkins County jail but had not been arraigned as of Saturday at noon. 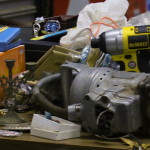