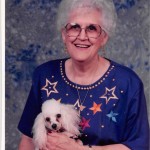 Funeral service for Mary Anna Whitley Patty, age 90, of Sulphur Springs, TX, will be held at 11:00 a.m., Saturday, March 28, 2015 at Shooks Chapel United Methodist Church with Rev. Steve Cook and Rev. Henry Suche officiating and Linda Suche assisting. Interment will follow at Shooks Chapel Cemetery with Brian Persinger, Paul Smith, Jimmy Winfrey, Bill Alford, Johnny Ferguson, and Troy Garrett serving as pallbearers. Visitation will be held from 6:00 to 8:00 p.m., Friday, March 27, 2015 at West Oaks Funeral Home. Mrs. Patty passed away Thursday, March 26, 2015 at Hopkins County Memorial Hospital. She was born on August 16, 1924 in Sulphur Springs, TX, the daughter of James M. and Willie Williams Alexander. She worked in management for Sears, retiring in 1980, and then J.C. Penny, retiring in 1996. She was a member of Shooks Chapel United Methodist Church. She married Jessie C. Whitley on June 30, 1946 in Rockwall. He preceded her in death on May 14, 1970. She later married Howard Patty on July 7, 1979 in Texas City. He preceded her in death on March 4, 1994. She is survived by daughter, Debbie Whitley of Sandia, TX, longtime friends, Nancy Hallam of Sandia, Rev. Henry and Linda Suche of Sulphur Springs, and Lynna Nichols of Sulphur Springs who was also her caregiver, and numerous nieces and nephews. In addition to her two husbands, she was also preceded in death by her parents. Arrangements are under the direction of West Oaks Funeral Home.