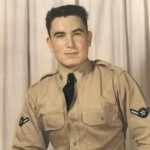 Graveside funeral services for James Franklin Wooten, age 78 of Brashear will be held Sunday, March 29, 2015 at 2:00 p.m. at Brashear Cemetery.

Mr. Wooten passed away on Wednesday, March 25, 2015 at his residence.  He was born in Bosco, Louisiana on November 13, 1936, the son of James Elbert and Juanita Samonia (Alonzo) Wooten. He served in the U.S. Air Force, was a land surveyor, member of the Knights of Columbus and of the Catholic faith.

He was preceded in death by his parents and sister-in-law, Elizabeth Delores Dickey.