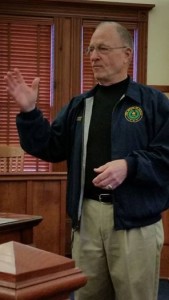 District 2 Senator Bob Hall was in Sulphur Springs Saturday morning for a town hall meeting with area residents and county and school leaders.

During the time, Hall pointed out that the Texas senate has a more conservative shift this year and that is not simply based on eight (8) new members who consider themselves conservative.  He attributed his statement to the fact that it now takes 13 votes and not just 11 to block a bill from being considered by the body. He stated the Blocker Rule had been detrimental to bringing bills to the floor of the Senate. He also pointed to campus carry and open carry bills (those that would allow a more visible presence of firearms) as an indicator of the conservative nature of the Senate. Touting Lt. Governor Dan Patrick’s timeliness, Hall said the Senate now starts on time. Resolutions presented to the body have also received a process that allows greater speed for presentation and conclusion to the matter. Noting that committee structure for the Senate has reduced the number of committees from 18 to 14, he says conflicts with meeting times have been reduced and allow Senators to attend more discussions regarding senate bills.

Senator Hall has filed two bills in the 84th Legislative Session. One, SB 438, would prohibit the use of public funds to enforce federal and international firearms laws that do not exist under the legislation of Texas. The second bill, SB 429, would protect Texas gun-owners from a deficiency in the current penal code, which criminalizes gun-owners who carry a handgun on another person’s property even with the permission of the property owner. Several fellow senators signed on to the bill at the time of filing.

Hall has also signed on in support of SB 346 which allows Texans’ who have a concealed handgun license to carry a handgun openly, SB 11 which would allow people who hold a concealed handgun license to carry on the campuses of public and private colleges and universities, and SB 342 which lifts the burdens and barriers on Texans’ “God given right to defend themselves and their families.” He also supports SB446 related to the increase of penalties for the offense of trafficking persons that involves a child victim or the death of a victim., SB 447 which would designate English as the official language of Texas, and SCR 6 which urges the United States Congress to propose and submit to the states for ratification the Parental Rights Amendment to the U S Constitution.

The Senator urged local politicos to travel to Austin to support those items of legislature that would benefit the county citizens. He is also seeking to receive input from schools in the district regarding their top five unfunded mandates that are hampering their work in educating students.