Interment will follow at Restlawn Memorial Park with Michael Collins, Ray Helfferich, Jimmy Helfferich, Gary Hudson, Doug Halcomb and Robert Halcomb serving as pallbearers. Honorary pallbearer will be Gary Collins. Visitation will be from 1:00 to 2:00 p.m., prior to service time at West Oaks Funeral Home.

Mrs. Houston passed away Tuesday, February 24, 2015 at Sulphur Springs Health and Rehab. She was born on October 9, 1921 in Como, TX the daughter of Henry Oscar and Libby Lewis Collins. She married Hugh L. Houston on January 20, 1944 in Sulphur Springs. He proceeded her in death in February 1985. Mrs. Houston was a homemaker and a member of Central Baptist Church. She also worked for Pratt Packing Co. for many years. 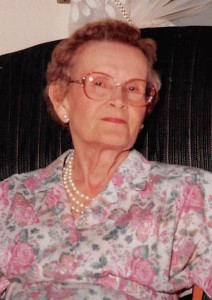