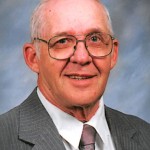 Memorial services for Richard D. “Dynomite” Johnson, age 80, of Scroggins will be conducted at 10:00 a.m., Thursday, January 29, 2015 at West Oaks Funeral Home Chapel. There will be no formal visitation. Mr. Johnson passed away Friday, January 23, 2015 at Hospice of East Texas in Tyler. Mr. Johnson was born on January 15, 1935 in Minneapolis, Minnesota, the son of Eric Anton and Anna (Broberg) Johnson. Mr. Johnson owned Johnson Construction for several years and owned the Cypress Springs Tree and Berry Farm for over 20 years. Mr. Johnson was a member of Clear Water Baptist Church where he served as Deacon. Mr. Jonson was a devoted family man to his family and church.

He was preceded in death by his parents, and brother, Ray Johnson. In lieu of flowers donations may be made to the Alzheimer’s Research at alzfdn.org. Arrangements are under the direction of West Oaks Funeral Home. www.westoaksfuneralhome.com