Local Theatre Not showing “The Interview”…..yet

Krista Lloyd, manager, of Trans Texas Theatre here in Sulphur Springs reports that although they haven’t decided whether or not they would choose to show the on-again, off-again Sony Pictures Movie, “The Interview”, it will NOT open here Christmas Day, due to scheduling conflicts.  Following national news reports released on Tuesday that Sony has decided to screen the Sony comedy at some theatres, Krista stated, “our Christmas release movies had already been finalized by the time Sony reversed their decision.”  She also told KSST news that they would be showing the Reese Witherspoon movie “Wild” in the slot that would have been open for “The Interview”.  Now for most theatres, it will come down to availability of space to be able to show the movie as it competes with other films also being released.   Also joining “Wild” will be the Angelina Jolie directed film “Unbroken” as it is released on Christmas Day also.  In addition to the new movies being released on Christmas Day, Trans Texas Theatres will also be showing “Annie”, “Exodus: Gods and Kings” as well as the latest installments of “The Hobbit” and “Night at the Museum”. 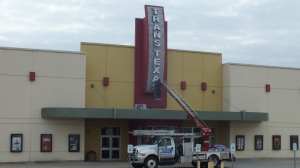