Wednesday, October 29, 2014, son in law Jason Barnett and I launched (barely) at Doctors Creek Boat Ramp and caught shad in the cove. The lake is about twelve feet low. Carefully following a narrow trench we made our way out to the main lake. Throughout the day we anchored down in about five different places. Fishing was slow but steady. Before leaving the parking lot we checked our rods and reels. My four rods were strung with one Penn spinning reel and three Okuma bait casting reels. Thirty pound test green Berkeley Big Game line. Three ounce, flat, no roll lead weights and number seven circle hooks. Eight inch steel leader. We found a place on the bumper of my pickup to put the hook and bent our rods double to make sure all knots were tight and lines had no weak spots. In a few hours of fishing we caught blue catfish of thirty five and twenty five pounds along with several smaller. After you catch one of those big blues you are the one that is hooked and can’t wait to catch another. Getting the boat loaded was harder than launching. I had to wade out belly deep and drag the boat on the trailer. That was probably our last trip until the lake comes up. Excuse me, if the lake comes up.

Next morning, Jean, Zack, and I discussed making a round to look at leaves changing colors. Within an hour we were headed for Broken Bow, Oklahoma and points beyond. Beautiful homes and colorful leaves competed for our oohs and ahs on Farm Road 195. Hadn’t been to the Trapp Family burial spot at the tiny Albion Cemetery in a while so we stopped for a break. Zack needed one the worst. The community of Albion is sixteen miles north of Clarksville on Highway 37and had a population of twenty in 1940 and fifty in 1990. A post office was open from 1886 -1904 then again from 1912-1929. My great, great uncle Land Lott Trapp is one of the relatives buried there. His boys, Sidney and Dewey, did most of the work running the ferry across Red River back in the Forties and Fifties.

On the road again we went to Idabel, Broken Bow, Smithville, Octavia, and east on Scenic Highway 1 toward Mena. Hickories won the yellow leaf category while sumac got the prize for its reds. Sassafras was gaudy with a mixture of reds and greens. At Mena we turned north on the first leg of a rough rectangle. Some of the corners were sharp and the drop-offs deep so hang on as we pass through Acorn, Y City, Boles, Needmore, and Waldron, home of Lecil Richard “Tom” Sawyer. This football coach for the Waldron Bulldogs coached in the Thirties, Forties, and Fifties, piling up an 87% winning record.

North of Abbot we barely squeezed through the Mansfield Cemetery with its markers a foot from the road on both side. First highway I ever saw where traffic speeds that close to tombstones. The name reportedly came from the 1800’s when somebody asked the railroad construction foreman how far they were along with the track. He was referring to somebody’s farm and said, “Oh down about that ‘man’s field.’”

On through Witcherville we came to the tiny town of Jenny Lind and Old Jenny Lind Road. Both of us asked at the same time who was Jenny Lind. I thought it was that woman that owned the weight loss company. After doing some digging I found Jenny Lind was born in Sweden in 1798. When she was nine year’s old a maid heard her singing. The maid just happened to be in the employ of the main star in the Royal Swedish Opera. She took Jenny to perform for the star. A year later Jenny was on the main stage. In 1849 P. T. Barnum invited Jenny to come to America on a year tour. After she arrived, America suffered from Lind Mania. Tickets to performances were very hard to get and expensive. She stole American’s heart. The year tour made Barnum fourteen million dollars richer and Jenny, ten million, in today’s money. Across the United States many streets and roads were named after her, some in very large cities. I know where there is a small town on a back road in Arkansas named Jenny Lind. Next week, on to Ft. Smith.

Congratulations to thirteen year old granddaughter Darby Reed of Arbala on her successful deer hunt Saturday. Her first buck may be hard for her to beat. Eighteen and a half inch wide rack. An eight point with kickers. 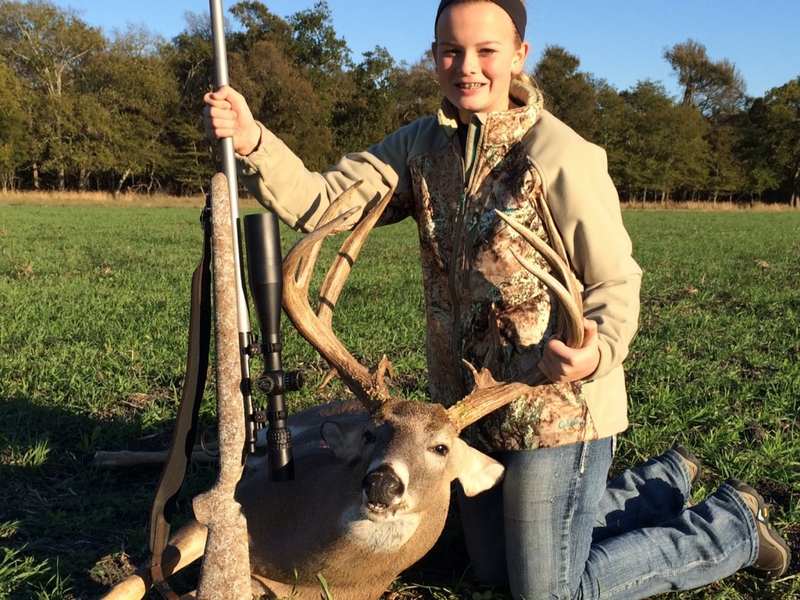 Hillary Almon Murray sent a picture of a 37 inch long copperhead her dad killed at McComb Hill between Cooper and Commerce. That’s probably bigger than most people ever see. My “snake book” shows the record to be fifty two inches. Years ago Gary Thompson brought me a short section of one he ran over while shredding. It was as big around as a Coke can and was surely more than the thirty one incher.