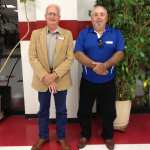 The North Hopkins Alumni Association held their annual homecoming on Saturday, November 1. Registration began at 4:00, followed by bingo and visiting. A barbecue dinner, catered by Andy and Mary Lou Wright, was served at 5:30. After the meal, President Tommy Long called the meeting to order and welcomed the guests, then introduced the other officers – Evelyn Horne, Vice President; Sherry Smiddy, Secretary; and Jan Vaughn, Reporter/Treasurer. Sherry had printed minutes for the attendees to review. They were approved. Jan presented the financial report. Tommy asked for volunteers for new officers for 2015. Joyce Goldsmith made a motion to keep the same officers. Nita Kelty seconded the motion and the officers were approved by acclamation. The Class of 1964 was honored for their 50-year homecoming. Due to various circumstances, only two of the eleven graduates from that class attended. Billy Gene Scott and Marvin Weir were the honored guests. They were given the opportunity to share a little about themselves, and then a video of their school years was played. The video was made my North Hopkins teacher – Mrs. Lucas and her technology classes. All of the other North Hopkins graduates were asked to share their name and graduation year. The group discussed the homecoming and expressed a desire for a larger crowd. Thirty-one attended this year. It was decided to change the date to the second Saturday in October, which will be October 10, 2015. Please mark your calendars and pass the word.