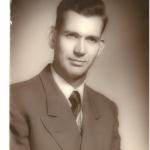 Funeral service for Joseph Henry Moon, age 87, of Point, will be held on Thursday, Nov. 6, 2014, 1:00 pm, at Wilson-Orwosky Funeral Home Chapel. Burial will follow in Clifton Cemetery. Bro. Billy Smith will officiate. Visitation will be Wednesday evening, 6:00-8:00 pm at the funeral home.

He honored his country by serving in the U.S. Army.

Mr. Moon worked for and retired from Dixico Company as a foreman over the maintenance department. He was a machinist.