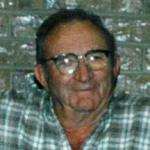 Mr. Thompson passed away on Saturday, November 15, 2014 at Sunny Springs Nursing Home in Sulphur Springs. He was born on August 12, 1925 in the Nelta Community the son of William N. and Nettie Lancaster Thompson.  He served in the U.S. Army during World War II  and was a retired truck driver, equipment operator and rancher.  He married Johnell Wunsche who preceded him in death in 2001.

He was preceded in death by his parents, one brother, Earl Lancaster and one grandson, Michael Vaughn.