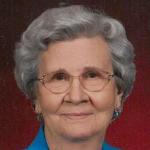 Dorothy passed away on Monday, November 24, 2014 at Carriage House in Sulphur Springs. She was born in Hopkins County on February 26, 1924, the daughter of Nando and Dora Hasley Denton. She married Paul Watson in 1944 in Hopkins County.  He preceded her in death in 2002.  She was a retired homemaker.