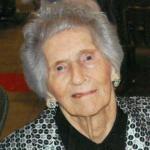 Graveside funeral services for Violet Hodge Hettich, age 100, of Winnsboro will be 11:00 a.m., Tuesday, October 21, 2014, at Shooks Chapel with Sam Sevier and Roger Elliott officiating. Visitation will be one hour prior to the service at Murray-Orwosky Funeral Home.

Ms. Hettich died on Sunday, October 19, 2014 at Whispering Pines Care Center in Winnsboro. She was born in Lone Oak, TX on July 20, 1914, the daughter of Henry Lester and Mary Willard Hodge. She married Walter Milburn Hettich on December 21, 1946 in Sulphur Springs. He preceded her in death in 1994. She was a homemaker and a member of the Shannon Oaks Church of Christ.

She was preceded in death by parents and two brothers, Moxie Hodge and Jewel Hodge.