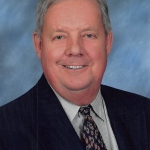 Travis Lee Owens, lifelong resident of Hopkins County passed away Saturday morning October 4th at Carriage House Manor nursing home in Sulphur Springs. Travis was born in Hopkins County on November 24th 1939. He was the son of O. B. and Janie Morgan Owens. He married Linda Wood Owens of Commerce on July 20, 1962 in Hopkins County. Travis enjoyed a long, rewarding life in spite of his health issues. He attended school in Sulphur Springs, graduating with the class of 58. He attended Texas Tech University, but due to his father’s health conditions returned home and graduated from ETSU. He received his BS degree and continued to do post graduate work. Travis, being raised on dairy farm at Star Ridge was no stranger to hard work. He began his career in Caddo Mills in 1962 teaching and coaching sixth graders and driving a school bus. He left the teaching profession to become a financial analyst at E-system in Greenville. In 1977 he moved to Sulphur Springs and became City Finance Director later becoming City Manager. While working for city government he met city councilman Mickey McKenzie, who asked Travis to join the team at GSC Enterprises. He worked at the Sulphur Springs and San Antonio divisions. He returned to Sulphur Springs in 1990 and retired as Corporate President of GSC. Travis enjoyed traveling the world, fishing, golfing, hunting and pranking his peers, but his greatest love was dining on great food. Travis had a love for people young and old of all walks of life. His caring and generosity made an impact on the lives of many. He was a very humble man, never holding himself above others.