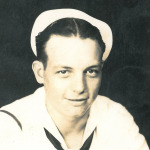 Thomas Franklin Jenkins passed away on Wednesday, October 22, 2014 at Hopkins County Memorial Hospital. He was born in Alba, TX on January 30, 1926 the son of Thomas Fred and Zonie Ozanie Biddenfield Jenkins. He married Lelia Dalton on August 29, 1980. She preceded him in death in 1995. He served in the United States Navy during Word War II.

Arrangements are under the direction of Tapp Funeral Home www.tappfuneral.com