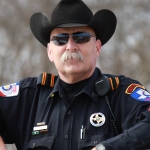 Lt. McLarry passed away Sunday, October 12, 2014 at Hunt Regional Hospital in Greenville. Lt. McLarry was born on March 30, 1956 in Fort Worth, TX, the son of Gibson Howe and Billie Joe (Morgan) McLarry. He married Charlotte Elaine Moore on November 9, 1979 in Grand Prarie. She survives. Lt. McLarry worked for the Hopkins County Sherriff’s office as a peace officer for 9 years. He also retired from Farmers Electric Co-op after 25 years. He was a fire instructor for Texas A&M fire academy in Bryan, and was the Chief for Campbell Volunteer Fire Department. Lt. McLarry was also on the Campbell ISD school board and the Campbell Youth Organization. He was a member of Central Baptist Church.