Back in the Eighties I was on the jury during a murder trial at the courthouse in Cooper. Seemed like it lasted almost three weeks. Judge Lanny Ramsey presiding and Jim Chapman prosecuting. Witnesses, reporters, and just the ordinary curious attended the trial. Some days the testimony would go a little past noon before we dismissed for lunch. Right at noon, somebody in City Hall would flip a switch and the very loud air raid siren would go off. We locals would glance over the room and giggle at out of county folks that were thinking about crawling under the benches. They thought it was an air raid I guess. Let’s digress from the siren a minute before leaving the courtroom. You know those old timey wooden chairs that have rollers. The kind that will let you lean way back and get comfortable. There was one of those in the witness box. It went way back if you leaned back very far. I guess it thought you wanted to put your feet up on a desk. It went back like a recliner. Most of the time when a new witness would be sworn in and before they sat down, Judge Ramsay would whisper, “Kinda watch that chair. It goes back pretty far.” Even with his warning, and sometimes he forgot, when people leaned back they thought the chair was going to fall over backward. Their arms and feet would go up trying to balance themselves. All the jury members would have their hands in front of their faces and quietly laughing. We knew to get ready each time somebody new sat down.

But back to the siren. Somehow the subject came up about the 12:00 siren as Junior Larkin, Kenneth Gillean, and I sat around a campfire a while back. They looked forward to it as many people did so they could stop for lunch and rest a while. Ronny Glossup and a few more at our weekly North Hopkins Hootenanny told of also using the siren for the noon rest and dinner. The main purpose for the siren was to alert firemen to come to the fire station then go fight a fire. Sounding the siren at noon was a test to make sure it was still working. I think one blast means a fire inside the city limits and two meant out in the county. Several continual blasts for a tornado. I got to wondering how long the siren, commonly called the fire whistle, had been in use. E.J. Cates and Dean Eudy gave me some information this weekend. One of them told me at the Chigger Fest that the Cooper Fire Department was organized in 1914. Dean said he has seen a picture from back then that showed a large bell at the courthouse. Probably it was used to alert the firemen back then.

Seeking information about the fire whistle allowed me to excavate some humor. I heard this from Edwin Slough in Nu Way while I was asking him if he knew when the siren was first used. He told me a related story involving Sucker Echols so I called Sucker and got some details. Harold D. and G.C. King were hoeing cotton for Sucker right behind his house on Highway 64 not far from the Dairy Queen. As was common back then field workers brought their lunch and ate by the wagon or under a nearby shade tree. Sucker had to go to Paris and told them to hoe until they heard the noon whistle then stop to eat. Would you believe there was a fire at 9:30? They had no watch and thought it was the noon whistle. They ate dinner at 9:30 that morning and were about to starve when Sucker got back at 6:30. Now that’s a story.

The actual siren has been moved a few times over the years and I remember one time the mayor hired me to climb the water tower and get a dead pigeon out of the fan part of the siren. They would nest inside or maybe roost there at night. When the siren tried to spin it hung on a fat pigeon and the blade couldn’t turn. I don’t remember how high up it was but was higher than any tree I ever climbed up in. Send your info about when the siren was first used to my email, regular mail, or phone me. 261 CR 1197 Cooper, Texas 75432 903 439 8110

Correction section. In reference to the picture of the plant in last week’s paper, I was thinking of Hearts a Bustin’ but wrote it was from an American Beauty Bush. It was Hearts a Bustin’.

The beautiful and cool weather this weekend stirred within me a longing for a hog hunt. Another call came from Kensing. The hogs were back after we had run them off last week. I sent out texts to several guys to meet at 1:00. Three blocks from church I got a nose bleed so I just went back home. Changed clothes and sent more texts to meet at 10:00. Meeting near the old church/community center were Stan Szafrin, Trenton Jones, Casey Williams and me. Catahoula Purdy and Plott hound Slobber raced out of sight as soon as they were turned loose. Thirty minutes later they were baying down in South Sulphur Channel. Casey’s dog, Pepper, heard the barking and ran to help. A 240 pound boar was bayed in the water. Pepper got cut before Stan could down the hog with my .30-30. Back at my four wheeler the other three held Pepper while I put five staples in his cut. Casey and Trenton got in the supply box on my four wheeler and cleaned out my supply of Beanie Weenies and Vienna sausages. Stan is going to clean off the skull and preserve it European style. Now let’s go watch the Cowboys. You know how if you miss a meeting in some towns/communities they tie out a goat in your front yard? Sometimes plastic pink flamingos are used. When I got home some Methodist Church member had put the customary pink toilet seat beside my driveway as a reminder I missed church today. 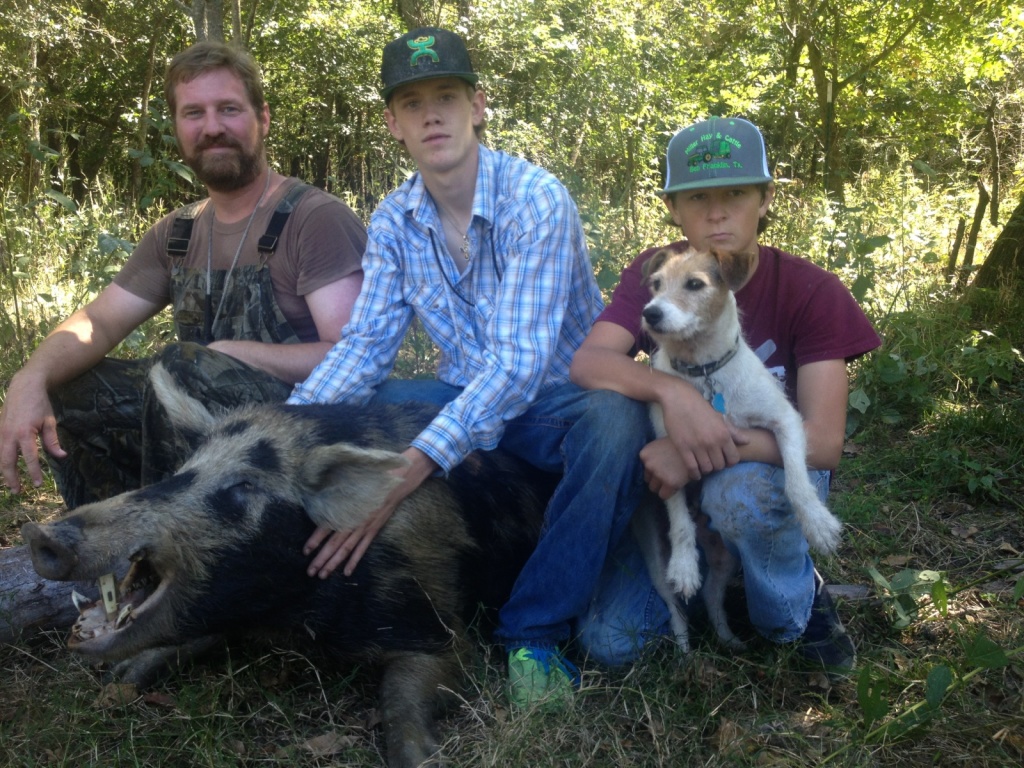 A woman wanted to prepare steak and mushrooms for about twenty of her friends. Instead of paying for expensive mushrooms she decided to pick some on her farm. As a precaution she cooked some and fed to her dog, Spot. After a few hours he was okay so she prepared more with steak for her guests. Midway through the meal the maid rushed in and said, “Old Spot is dead.” The hostess panicked and called 911. They were pumping the stomach of the last of the guests when the maid came back in and said, “You know. That truck that hit old Spot didn’t even slow down.”
[email protected]