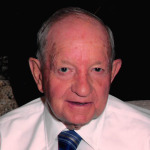 Mr. Young worked for Cabell’s Dairies from 1960 to 1989 as a retail sales manager where he started out in Dallas and then was transferred to the Tyler office and then the Longview office and then to Sulphur Springs. He retired from Southland Corporation and was a member of the First Christian Church.