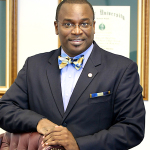 New to the lineup of Homecoming events is an Alumni Choir Reunion Concert slated for 7:30 p.m. in the Ray Karrer Theater on Nov. 8. All former PJC alumni and students who performed in the choral program during their time at PJC are invited to be part of the Reunion Concert directed by Philip Briggs, PJC’s Director of Choirs and music instructor.
Dr. Michael L. McFrazier, Vice President for Administration and Chief of Staff at Prairie View A&M University, and tenor opera singer, Grammy-winner and author Jay Hunter Morris have been selected to receive the College’s highest honor this year at the Distinguished Alumni Award Luncheon on Nov. 8.

“We are especially pleased to have two extremely talented honorees this year,” said PJC President Dr. Pam Anglin. “The success these gentlemen have achieved in their chosen fields brings great honor to PJC, our community and their professions.”

McFrazier graduated with his associate of arts degree from PJC in 1988 and also attended Baylor University where he earned three degrees, a bachelor of music education, master of music with emphasis in vocal performance and a master of science in educational administration. His desire to be involved in higher education led him to earn his doctorate in educational administration from the University of Arkansas, Fayetteville. He also completed the Management Development Program at Harvard University.
Along his education journey, McFrazier received many awards at each level. At PJC he was named “Mr. PJC” by his peers and was chosen by the faculty and staff as the Distinguished Service Award winner in 1988.

At Baylor, he was an Academic All-American, named to the Music Hall of Fame, and selected for “Who’s Who” at several levels. He is the son of Rev. Levern & Queen McFrazier of Paris. 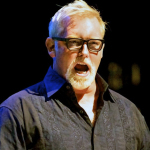 McFrazier will be featured in the Alumni Choir Reunion Concert, and proceeds from the concert will be used to create an endowment in McFrazier’s name.
Morris attended PJC from 1981-1982 and during the summer sessions in 1983 before continuing his education at Baylor University, where he earned a bachelor of music education degree. He later earned a master of music in vocal performance at Southern Methodist University, and studied for two years at the Julliard School of Music in New York City.
Morris’ interest in opera surfaced when a friend invited him to see La Traviata in Dallas, and he was inspired after meeting famed tenor, Alfredo Kraus. Morris began to study classical music and opera performance and joined the chorus at Dallas Opera to gain experience. Within a short time he began singing small roles and then was cast in the tenor role in Terrance McNally’s Masterclass, a role he played for over two years on Broadway with Zoe Wanamaker. In 2009, Morris was invited to take the lead in Siegfried in Wagner’s famous Ring Cycle–the longest role in opera–at Seattle Opera.  He was then invited to sing the role of Siegfried at San Francisco Opera in 2011, and finally and perhaps most famously, at the Metropolitan Opera in their new production by Robert Lepage in 2011-12. The production was broadcast live to cinemas worldwide, continues to be played on PBS, and recently won a Grammy for Best Opera Recording. Morris will again sing the role this summer in Budapest at the Wagner Days Festival. Morris recently published his first book, “Diary of a Redneck Opera Zinger.” He and his dancer-singer-actress wife, Meg Gillentine, live in Roswell, Georgia, with their son Cooper Jack .

In addition to the Distinguished Alumni Award Luncheon set for the Love Civic Center on November 8, other Homecoming activities include the President’s Reception, Annual Alumni & Friends Association board meeting, Academic Hall of Honor and Sports Hall of Fame ceremonies, and basketball games where the homecoming king and queen will be crowned.

The 90th Anniversary celebration events will conclude with the concert featuring McFrazier and the Alumni Choir. Former students wishing to be part of the Alumni Choir, contact Briggs at [email protected] or at (903) 782-0343. Ticket sales for the Distinguished Alumni Awards Luncheon and Concert are on sale now.
For more information about these events, contact Derald Bulls, Director of Institutional Advancement/Alumni Affairs, [email protected], (903) 782-0276.