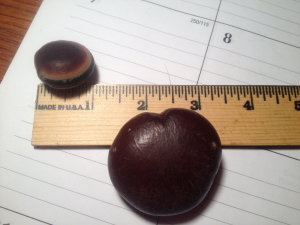 More about our recent fishing trip to Galveston. Tuesday, September 9. Wind and tides bring strange items to the beach. Among the seaweed this trip we found three, relatively rare, large seeds. Some were heart shaped, mahogany brown, and two to almost three inches in diameter. A quick glance reminded me of a buckeye seed and later research showed the seeds to be good luck charms like buckeyes. One looked exactly like a little hamburger. To get a name for the seeds I visited the office at Brazoria County Park near the southeast end of the San Luis Pass toll bridge. Names for this hard coated seed go on and on. Sea heart, matchbox bean, sea purse, sea pearl, Mary’s bean, hamburger bean, horse eye, deer eye, nickernut, lucky bean, sea coconut, and Columbus bean.

Without this bean our history books might not be as they are today. Colombus is reported to have sat for hours contemplating these floating beans. He knew they grew nowhere he had ever traveled. From where did they come? There must be more land to discover. That’s just one of the many stories about the lucky, floating beans.

The largest of the Columbus beans comes from the coast of Africa and are a foot wide with a thirty inch circumference. They are similar to the shape found in the anatomy of human females and sell for around five hundred dollars. In Europe the regular sea hearts were cut in half, fixed with tiny hinges, and used for match boxes, snuff boxes, and some covered with silver and jewels. These shiny, tough seeds can float for many years, carried by currents and wind. Government tests with tiny bottles show the currents could take a sea heart from Mexico to Ireland in about a year.

Where do these giant “peas” come from? Sea hearts are the largest of the pea (legume) family and Costa Rica forests have many of the vines intertwined with trees. Monkeys and other animals use the giant vines to travel across the jungle, giving the local name of monkey ladders. This fast growing vine brings memories of “Jack and the Beanstalk” as it can grow a hundred feet long in eighteen months. Heavy rains of the forest carry the floating seeds down rivers to the sea where they are at the mercy of wind, tides, and currents. Think of shelling peas. Each pea has its own compartment inside the hull. Sea hearts grow the same way, and how they grow! The pods get up to six feet long and contain up to fifteen sea hearts, each in its own chamber. If you go beachcombing watch for these interesting floating seeds that very possibly steered Columbus’ thoughts to the New World.

Now back to fishing on the beach. Tuesday the water was very clear and we caught several shiny ladyfish. Just before sunset, something bent Junior’s rod double and the fight was on. Anything fighting that hard had to be a large shark, jack crevalle, bull red, or a sting ray. Since a ray will bury down on the sand and “stick” to one spot we ruled it out since this one kept moving. As minutes passed, a shark was ruled out since they usually give up quicker. Our votes now went to a jack crevalle or bull red. Finally, after severely stress testing Junior’s gear and heart, a huge sting ray was pulled into the edge of the water. It flapped its “wings” in the shallow water, splashing everyone, and looked amazingly like an elephant flapping its ears. It was so heavy one person could not lift it. I got on one side and Junior the other. After the hook was removed we put our fingers in its mouth to gain a hand hold and were able to lift it for pictures. It measured four feet from one side to the other. The thrill of the day as the ray swam away and the Sun was almost down. Wednesday, September 10. The seaweed was terrible but slacked enough for Carol to hook a forty one inch jack crevalle, claimed by some to be the fish with the most fight, pound for pound, of all.

Thursday was travel home day. For several days I had struggled with a “catch” in my back just above my left back pocket. On our way home we stopped at a Raceway Travel Center in Dayton, northeast of Houston. While Jean went inside I was bent over and limping as I took Zack over to the curb. Painfully I sat on the curb while Zack smelled of some bushes. A woman came by while I was limping to the curb. She pulled up to a gas pump and began filling her car. Later, instead of getting in the car to leave she came toward me. I thought she was wanting money like so many do at gas stations. I stood up to greet her and she shocked me by handing me a twenty dollar bill. Told me to go inside and get me and my little dog something to eat. What a humbling experience. Just two days before in Galveston I gave a man with a sad story some money. This woman had not seen me get out of our new Ford. All she saw was a crippled man and his little dog, both probably hungry. My mind raced. What to do? More blessed to give than receive. Who was I to spoil this Good Samaritan’s pleasure? I asked myself, “What would Jesus do?”, then took the money and thanked her, making sure she was out of sight before I climbed back inside our shiny pickup. Jean laughed harder than she had in a while. Sunday morning at church I gave that same twenty dollar bill to Ron Morgan to pass on to the Hope House in Cooper.

A man asked his friend if he was driving a car with a two foot drop off on the left, a fire engine going his same speed on the right, a zebra in front same speed, and an horse behind same speed what would he do? His friend said, “I’d get off the merry go round.”
[email protected]