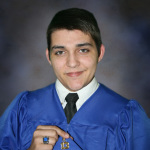 Visitation for Spencer Michael Armstrong, 18 years young, of Sulphur Springs, will be held at 1:00 to 3:00 p.m., Sunday, September 14, 2014 at West Oaks Funeral Home. Spencer passed away on September 9, 2014 at his residence. He was born on September 17, 1995 in Rowlett, the son of Dean and Tami Armstrong. He was a graduate of Sulphur Springs High School Class of 2013, a member of Key Club, Wildcat TV cameraman and Editor, (C.A.P.) Civil Air Patrol member, and percussionist in Sulphur Springs Middle School. He worked at Dairy Queen as a cook for a year and recently for Brookshire’s as a Deli Clerk.

He is survived by his parents and brothers, Ryan Armstrong, Jonathan Ansley, wife Ashlee and children, Haydn and Branson of Brashear, Timothy Ansley, wife Alysha and daughter Amelia of Virginia Beach, Dustin Karnes, wife Ashley and children Shelby, Allison, and Liam of Houston, sister, Kirsten Wright, husband Mitch and children Tessa and Gavin of San Antonio, grandparents, James and Linda Fields of Annabella, UT, Roxanne and Mark Harris of Box Elder, SD, as well as several aunts, uncles, and cousins, god parents, Michael and Nyla Goody of Garland, and multitudes of friends whose lives he has affected in a positive way.

He was preceded in death by grandparents, Margaret Armstrong and Richard Seder. Arrangements are under the direction of West Oaks Funeral Home. www.westoaksfuneralhome.com