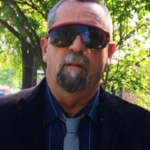 He married Shelly Renea Brown on September 11, 1984 in Sulphur Springs, Texas. She survives.