Home » News » Sherman Up Next 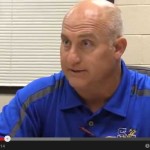 Wildcats Football Coach Greg Owens said his main emotion after Friday night’s 33-21 loss to Rockwall-Heath was disappointment. He was very impressed with the Hawks large offensive line and their hard-hitting defensive secondary. Coach Owens was complimentary of the play of both the Wildcats offensive and defensive lines. He noted the team didn’t play as well as they wanted to. Coach Owens added the Wildcats did play hard.

Next for the Wildcats is Sherman at Prim Stadium Friday. They too are 0-1 after a 63-0 defeat Thursday night at the hands of Frisco Lone Star. The Bearcats have a new coach. Gary Kinne has moved on and Bill Patterson came from Justin Northwest to take over in Sherman. Wildcats Coach Greg Owens says the Bearcats have lost a lot of skilled players. They are expected to start a sophomore quarterback due to an injury.