Sunday afternoon daughter in law Jinger Williams was riding her bike on County Road 1170 south of Charleston and saw a four foot long, canebrake rattlesnake crawling across. She called Jean to see if we wanted to see it and we headed toward her, just around the corner by the Templeton gate. I was afraid it would crawl off in the woods before we could get there but for some reason it stopped just off the road and coiled up. Since these protected by law critters are a little scarce it is a treat for most folks to see one. I started calling people I thought would be interested and they made more calls. The snake seemed content to let us watch it and over an hour’s time probably twenty five people came and went. Most took pictures or made videos. As darkness approached, out came the inevitable question. What are you gonna do with it? One guy shared with us his grandpa’s “Three S System.” Shoot, shovel, and shut up. As we watched the snake several commented on the beauty of the pattern. Just before dark we watched it crawl off into the woods. I see about three a year near Charleston and hopefully everyone will watch their step when in the woods or brush. As we drove home a three foot long cottonmouth was crawling across the road. Since they are much more plentiful and not protected by law we sent it to the big snake pit in the sky. Maybe we need to rename 1170 and call it Snake Street. Seems a little early for the snakes to be prowling around so much. Normally it is more of a fall thing. Maybe a sign of an early fall. 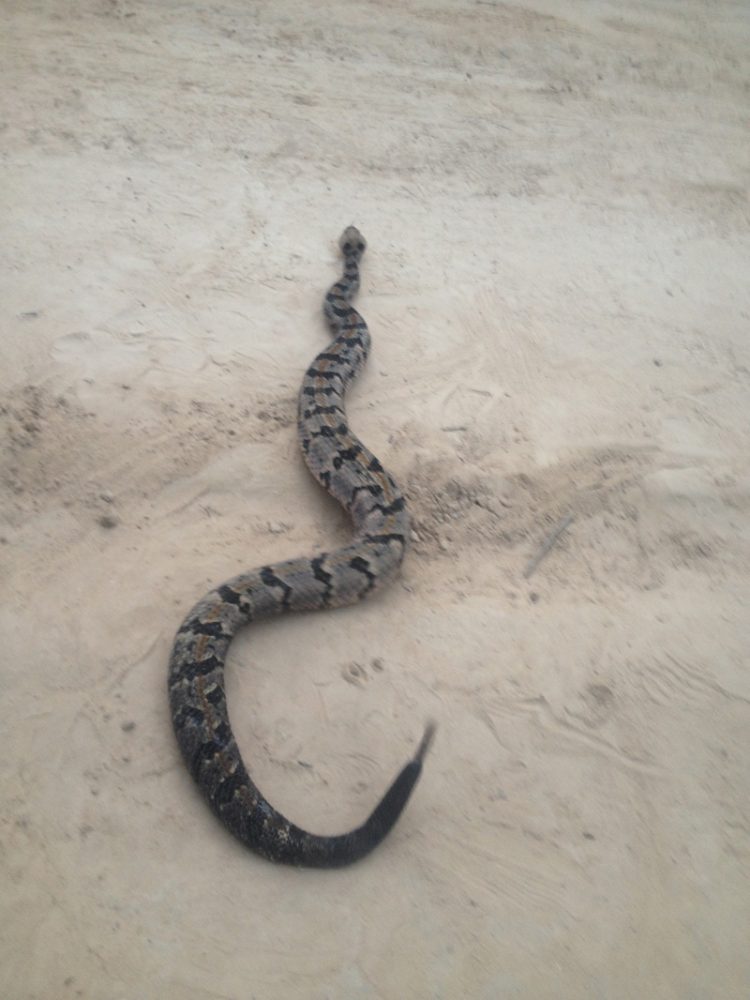 August is one of the months during the “Dog Days” of summer. I asked an old feller once why they were called that and he said it was so hot the dogs just lay around in the shade. That may be one explanation but not according to the ancient Egyptians. They were advanced enough to know our winter night time stars are on the other side of the Earth during the summer. Our winter stars are “up” during the summer days. If we had an eclipse of our Sun in summer we could see bright Sirius and other winter stars. Stars are in the sky both day and night. We just can’t see the day time ones for the bright light of the Sun. Our summer stars are “up” on winter days. That means the brightest star, Sirius, the Dog Star, is in the summer sky during the day near the Sun. They believed the summer was so hot because Sirius was adding its heat to the Sun’s. Because the Dog Days are in progress now, I have not been stirring up much new fodder for this article. Let’s go back to 1986 and follow along on our vacation to the Smoky Mountains and points beyond.

Sunday, July 6, 1986. Last night Greg, Jean, and I stayed in a KOA at Lakeland, east of Memphis. The people in a tent next to ours talked a long time then when they hushed a car came in pulling a camper. They got the trailer hung in a dip and took forever to get out. Then they opened and slammed car doors about a million times. Mamas teach yo kids how to push doors shut slowly and talk quietly when others are trying to sleep. Up at 6:30 and followed Highway 64 toward the Smokies. My ancestors from Georgia made an exodus to Texas after the Civil War but decided to stop off near Iuka, Mississippi for about ten years. At Selmer, Tennessee we took Highway 45 to Corinth, Mississippi then to Iuka. This little town has huge trees in a mineral spring park. Water is naturally 99.9% pure and won first prize at the St. Louis World’s Fair. The Trapp’s actually lived and farmed near Iuka in a community called East Port right on the edge of today’s Pickwick Lake formed by damming up the Tennessee River.

In Texas most rivers run east or southeast. When we stopped at the Pickwick Dam it seemed the Tennessee River was going the wrong way as it came through the dam and proceeded west. Many rivers run mainly west if they are east of the Mississippi. Stopped at Falls Mill and saw how a small stream filled buckets with water and turned a corn grinding mill. On through Waynesboro, Tennessee and to Roy Acuff’s Motel near Jasper, not far from Chattanooga.

Monday, July 7, 1986. Traveled back roads beside the Ocoee River where it was lots of canoeing, kayaking, and tubing. Up 411 to Maryville then Townsend and Gatlinburg, a huge tourist trap. South across the Smokies to Cherokee, North Carolina. Gobs of Indian lore and souvenir shops. A Native American version of Gatlinburg. Spent night at The Big Chief Motel. To be continued.
August 31 Saturn is to the lower right of the Moon and Mars to the lower left. Find The Big Dipper in the northwest in August and the zig zag shape of Cassiopeia in the northeast. As September arrives find the Great Square of Pegasus rising in the east.
A man ordered a cake for his wife’s birthday. He told the girl at the store to write, “You never look old” on the top part and “You always look beautiful” on the bottom part. He stopped by and got the cake after work and carried it home without looking at it. His wife opened the box and read, “You never look old on the top part and you’re always beautiful on the bottom part.”
[email protected]