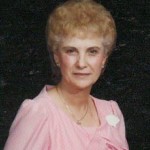 Graveside Services for Joyce Lou Heckard, age 79 of Sulphur Springs, will be held at 11:00 a.m., Tuesday, August 12, 2014 at Rockdale Cemetery with Rev. Charles Rawlinson officiating. Visitation will be from 9:30 – 10:30 a.m., prior to the service at Murray-Orwosky Funeral Home.

She was born on October 28, 1934, the daughter of Charles D. and Alma Self Wilson in Hopkins County, TX. She married Larry Heckard, who preceded her in death.

She was preceded in death by her parents; infant child and sister, Patsy Adams.