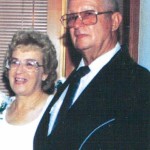 A shared memorial service for Mrs. Dymke, and her husband, Homer “Buddy” Dymke, who passed away on July 17, 2014, is scheduled for Saturday, August 16, at 4:00 PM at the House of Prayer Church in Emory, Bro. Matt Miller officiating. Both cremation arrangements and the memorial service for Mr. and Mrs. Dymke will be under the direction of Wilson-Orwosky Funeral Home of Emory. Online guestbook may be signed at www.wilsonorwoskyfuneralhome.com . In lieu of flowers memorial bequests may be made to the House of Prayer Church, 1380 Hwy 515 East, Emory, TX 75440.

Together with her husband they owned and operated the B&B BBQ in Kermit, Tx.