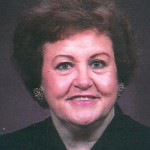 Mrs. Derr died on Friday, August 22, 2014 at Rock Creek Health and Rehab.  She was born in Altus, OK on June 29, 1933, the daughter of Elvis and Katie Mae Brown Derr. She was a homemaker and was a member of the Davis St. Baptist Church.

She was preceded in death by her parents; brother, Elvis Derr and twin sister, Betty Mize.