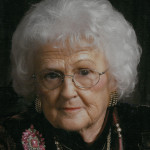 Graveside funeral service for Nell Attlesey McAfee, age 93 of Yantis will be 10:00 a.m., Monday, August 25, 2014 at Yantis Cemetery with Rev. Danny Meek officiating. No formal visitation will be held.

Mrs. McAfee died on Friday, August 22, 2014 at Heritage Nursing Home in Quitman. She was born in Reilly Springs, TX on November 20, 1920, the daughter of Hamilton “Babe” and Ann Blalock Attlesey. She married Ardell C. McAfee in March, 1936 in Reilly Springs. He preceded her in death in 2002. She was the owner of McAfee Farms Sweet Potato.

She was preceded in death by parents and one sister, Elise Lord.