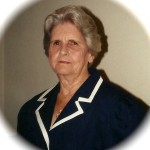 Funeral service for Sally Ann Dittman, age 96, of Emory, will be held at 10:00 am, Tuesday, Aug. 26, 2014, at Wilson-Orwosky Funeral Home Chapel.Bro. Billy Smith and Bro. Jerry Jackson will officiate.  A private burial in Slatter Cemetery will follow the service.  Visitation will be held on Monday evening from 6:00 until 8:00 pm at the funeral home.