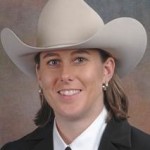 A Sulphur Springs native, Wende Wakeman, will soon be the highest-ranking female in Texas Ranger history. Thursday the Texas DPS announced that Ranger Wakeman would be promoted to the rank of Lieutenant effective August 1. Ranger Wakeman joined DPS in 1998 serving first as a Texas Highway Patrol trooper in Sulphur Springs and New Caney. In 2008 she joined the Texas Rangers in Conroe. On August 1, Lt. Wakeman will be stationed in Laredo.