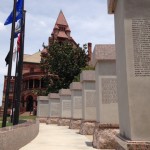 Some more minor damage has been done to several walls in the Veterans’ Memorial on Celebration Plaza in Sulphur Springs. The damage was discovered and was reported to the police department by a city official on Thursday just before 1 p.m. Several stones had letters and scratches lightly etched on them. Two stones had small chips knocked out on the ends. In all four of the stones containing veterans’ names had some damage.