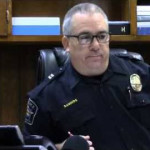 The Sulphur Springs Police Department continues to investigate the armed holdup of E-Z Mart at Shannon Road and Helm Lane that occurred Sunday at 10:38 p.m. Two men, one of them armed, took the cash drawer containing an estimated $40. Pictures of the two suspects have been posted on ksstradio.com and on the KSST Facebook page. Crimestoppers is offering a cash reward to anyone whose tip leads to the arrest of the suspects. Tipsters may remain anonymous. The Crimestoppers number is 903 885-2020.