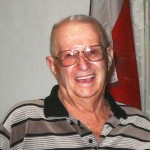 Buddy was born on November 20, 1930 in Rockdale, TX to Homer Thomas and Clara Mae Rice Dymke. He later married Betty Jane Williams in Galveston on July 23, 1949. He was an oilfield worker and retired after many years of hard work at several different oil companies.

He is preceded in death by his parents. Cremation arrangements are under the direction of Wilson-Orwosky Funeral Home of Emory. Future memorial service pending with family.

Online guestbook may be signed at www.wilsonorwoskyfuneralhome.com