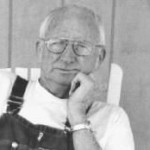 He was preceded in death by his parents, brothers, Raymond Adams, Fletcher Adams, Herman Adams and sister, Pearl Page.

Private services were held. Memorials can be made to the American Cancer Society.